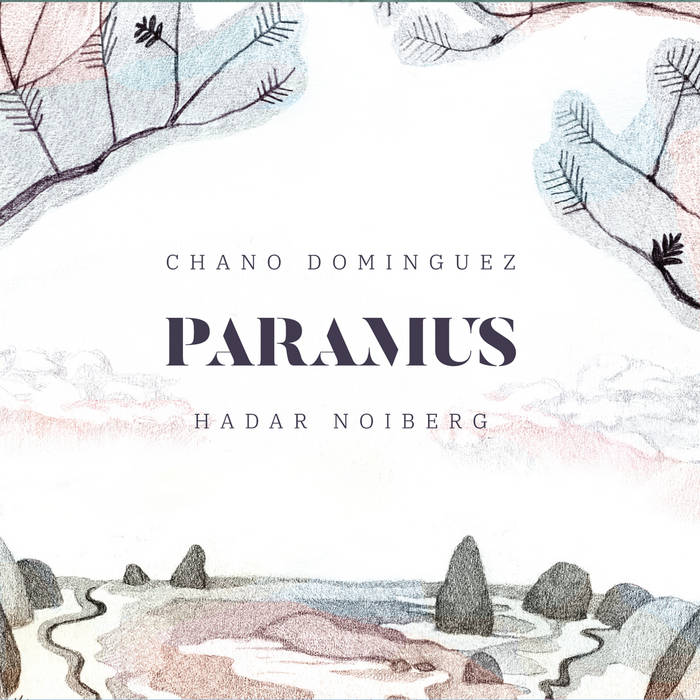 The Mediterranean Sea is framed by cultures that have shaped modern thought and art. The music of the region is wildly diverse but, due to both voluntary and forced cultural exchanges over the ages, remarkably interconnected. Spanish pianist Chano Dominguez and Israeli flutist Hadar Noiberg have found each other, and their musical languages fit beautifully, as can be heard on their new recording, Paramus.

Dominguez has long been considered one of the most influential pianists to emerge from Spain. His work in incorporating the flamenco styles of his native Andalusia into the improvised language of jazz has been revolutionary and has made him an indispensable part of the jazz lexicon of Spain and, invariably, a highly in demand performer.

The classically trained Noiberg came to New York City from Israel to further her studies when she was 21 years old. Since then, she has been involved in musical projects of all sorts, leading her own ensembles and collaborating with a variety of other artists, including Yamandu Costa, Anat Cohen and Dave Valentin. Along with her interest in jazz and Middle Eastern music, Noiberg has become involved in Latin music of all shades and come under the exuberant influence of Brazilian music, especially choro.

The two musicians first met at the 2017 Jazzahead Conference in Bremen, Germany. Dominguez was a featured performer with his own showcase and Noiberg, who had her own showcase the previous year, had heard of the pianist and was curious to listen to him in person. The ensuing performance enchanted the Noiberg and she made a point to introduce herself to Dominguez to see if they could perhaps work together.

It just so happened that Dominguez and Noiberg both lived in Brooklyn, and the neighbors began meeting regularly just weeks after their initial introduction. Their rendezvous found them not only rehearsing music, but also talking, not only about music but also philosophies, influences, and other things. Their communication, musical or otherwise, was inspiring and comfortable.

The duo found that their approaches to music fit well together, as they both had backgrounds in jazz and classical music along with a love for a variety of Latin music. Dominguez’s Spanish influences were not foreign to Noiberg, as her background in the widely eclectic music of Israel provided touchstones to the Iberian Peninsula and her own involvement with Latin American music gave her a grounding in some Latin rhythmic ideas. Further, many of the Israeli folkloric pieces that Noiberg introduced to Dominguez reminded him of holiday tunes from his native Andalusia.

After some time rehearsing, performing and honing, the two decided that they should take their new repertoire and make a formal recording. They convened at Trading 8s Studios in Paramus, New Jersey and had an incredibly moving experience recording an album worth of pieces, originals and covers, arranged by the two of them.

The recording begins with “Algerias De Cai,” a piece Dominguez wrote nearly forty years ago for his symphonic rock group, Cai. This version begins atmospherically before becoming a joyfully buoyant dance. The legendary Paco de Lucia’s gorgeous “Canción De Amor” is a haunting ballad and one of Dominguez’s favorite pieces. The pianist’s “Carrusel” is an old piece inspired by Sevillan rumba that Dominguez had never recorded, but after revisiting it with Noiberg, the piece was reborn with a Brazilian choro feel. Noiberg’s “Chango” is dedicated to Dominguez and imagines his playing blended with tango in a colorful and dynamic promenade.

Dominguez’s effervescent “HH” is written for Noiberg in a lilting Brazilian style while his “If I Think of You” is dedicated to his grandson with the intention of expressing the joy he feels being around one he loves. There is also an embedded tribute to Joe Zawinul and his love of fusion music that spawned naturally from the piece’s chord progression and rhythm. Brazilian music is a fantastic bridge between the worlds of jazz and classical music and that is apparent in the tremendous “Lôro” by Egberto Gismonti, which is played here in a loving way.

The sweeping “Morenika” is a folkloric Ladino tune that comes from the Sephardic Jewish culture that originated in Spain (and also a popular Israeli song), and combines Iberian and Middle Eastern musical influences for the duo in a very inspiring way. Shlomo Biderman’s “Na’ama” is an Israeli folkloric love song that encapsulates Noiberg’s feeling for Israeli music’s unique sense of space. Done on the spot with the performers’ eyes closed, the freely improvised “Paramus” highlights the duo’s wonderful musical connection and the inspiration they found while recording the album. The recording concludes with Dominguez’s “Plaza De Mina” which he originally wrote for the WDR Big Band but scaled down to emphasize the segueria rhythm along with the typical blues form found regularly in jazz working in perfect harmony.

Though from different backgrounds, Chano Dominguez and Hadar Noiberg have found common ground in the music on their new recording, Paramus.

Bandcamp Daily  your guide to the world of Bandcamp